ARV-3 (The After Light Saga) 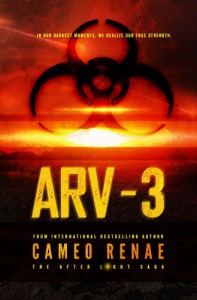 Abigail Park or Abi is a seventeen year old girl who went underground to live in what is called a hive. Abi, her mother, father, uncle, aunt and cousin along with a few other families all lived in the hives for thirteen years. Abi was four years old when she went into the hive. Abi and everyone else in the hive trained every day how to shoot and fight in hand to hand combat. They also worked out to keep themselves in shape. They knew that they would have to fight with others when they went topside again one day. But they didn't know that what or who they would be fighting was a big surprise to all of them.

Thirteen years ago when the fallout began the government created a vaccine hoping to help the people that had nowhere to go. People that had no hive to go to that would keep them safe and alive. Everything happened so fast that they didn't have time to test the vaccines properly. The vaccine did keep the people alive if what they were changed into could be called a live. They were not dead their hearts still beat so you couldn't exactly call them zombies but they were close.

Abi fell in love with one of the few guys, Finn that was her age who lived with them in the hive. Finn and Abi spent a lot of time together. They trained together, they ate together and they probably played together as children. They were only seventeen years old but they knew what it was to be in love. They both would have given their own life for the other. Abi and Finn would have also do everything and anything to help their families too. Abi and Finn both had great big hearts with a whole lot of love to go around.

I loved finding and reading a whole new and different story about the apocalypses. ARV-3 is one of the best books about the apocalypses that I have ever read. It will grab a hold of you starting with the very first word and will not let you go until you have read the very last word. I even read it on my phone while I was cooking. No joke I really did. I hope the next book in the series makes its debut real soon. I want to know more about Abi, Finn, Tina, Ava and all of their parents too. Their stories are ones that need to be told and I can't wait to read more of their stories. This is one book that I definitely recommend to all who love dystopian and apocalyptic.
Tweet